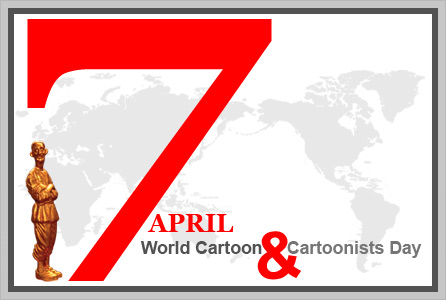 More than100 years ago, on the 7th  of April in 1907,a satirical review was published in Azerbaijan that it moved everyone in the East. Looking at the closed space filled with superstition , ignorance and dictatorship of that time ,we understand the effective influence of this publication and its cartoons on awakening  and movement of the masses. In the influence of these events, some revolutions occurred in this area , among them ,we can point to the constitutional revolution in Tabriz city and then in the whole of  Iran and the young Turkish in Turkey. By these revolutions , people became owner of vote and dictatorship were surrendered .The cartoons of this review that were published in Iran and Azerbaijan ,were very clear, intelligible and pretty.

We call this day, the day of cartoon and cartoonists in respect of the cartoonists who were excluded and pursued but they did their mission properly. Since 2005,every year, in some countries and cities ,the cartoonists have been holding ceremony in this day .I hope ,it become more and widely known.

By this way, we remind the importance of cartoon to community , for sake of this day, we gather together and draw cartoon for a free and full of peace world .