It is one of the most respected in the world of Polish satirical cartoonists. His socially engaged drawings instead of amusing to tears, but more often tend to reflect. This summer in particular, because the last of his works, entitled "control" enjoyed global success and set a strong counterattack madness associated with the game Pokemon GO. We invite you to talk with Paul Kuczyńskim.

Interia.pl: Is every day you are cheerful and witty guy? I ask because you are widely regarded as a satirist, but very often your work simply depress. Is a powerful, thought-provoking message.
Pawel Kuczynski: That's true. I'm not the type of cartoonist humorous, but in my opinion this is not satire antics and jokes. This is a very serious matter ...
advertisementIf, therefore, he had to write about a brief biographical note - for example on Wikipedia, which is still very modest about you - what would it entered into?

- I do not think my person is most important here, and my work. I prefer to focus on them.

I like it when acting independently and always curiously watching their "life".

It's interesting how some fall to your taste, while others remain incomprehensible.

I understand that you draw professionally. What did you do before?- Yes, it's my job. Previously, like any young artist in college, I carried out different jobs. I drew portraits at parties, painted copies of images that I performed interiors of apartments.

Twelve years in the business for you, but what happened last time, I think he did not expect. I'm talking about the graphics referring to a hit this summer - playing Pokemon GO.- This work of Pokémon I reminded myself. Recognizable in the world I am quite some time (mainly through the fan page on FB and a series of works on Facebook).

I am pleased that now in Poland was noticed. 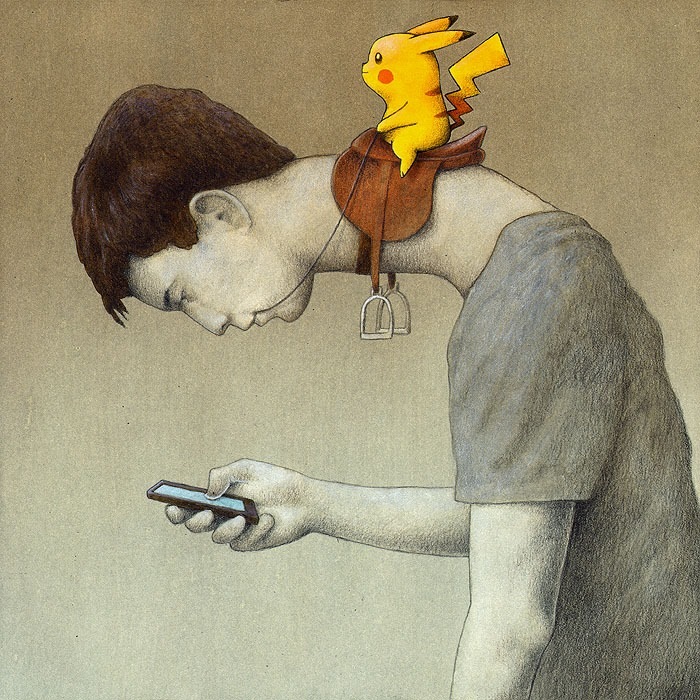 More than 274,000 shares that - drawing circled the entire world. What were the scenes of his creation?

- Yes, I had been crazy head for the last month. Illustration created for my publisher (an Internet portal).

At the beginning I had the idea to show a young man with a long neck in the characteristic pose, looking at smartphone.

The saddle was left free to work more "open" to interpretation, but the wave of success of Pokemon, I thought it would be more rooted in current reality and added Pikachu.

The message applies only to the game if the message has a wider dimension?

- Like I said, the work would have a broader message - about mindless succumbing to technical novelties.

Are your phone is one of the applications Pokemon GO?

- I Do not have a smartphone ... But I am very curious of this game and of what her success. 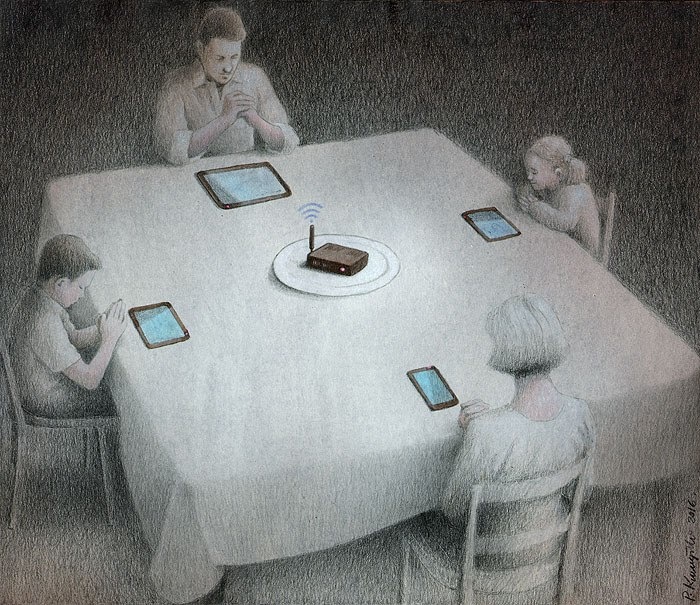 Politics, new technologies, Internet addiction - are topics that are often moving. You're just an observer, whether some situations your work affect you personally?You run a large fanpage, you have become famous thanks to the network.Are not you afraid that he will fall into the trap against which you follow?

- Last I often complains that I'm a hypocrite. I'm not an enemy of technical innovations. Actively I am using them and appreciate them, but on the other hand - that's what gives me the right to warn against pitfalls that can be lurking.

In his works, including a their experience. I think that's the strength of my works that show the authentic observations.- Someone will say that I do not play Pokemon, and prepared to work on them. Pokemon was used here as the key to understanding this work.

She could sit on the saddle every other game characters.

The most important is to understand that the treatment of technical innovations just for fun, is dangerous both for physical health, how much more to lose touch with reality.

Others write that with Pokemon by young people moved to pre-monitor and went outside.

This is obviously great. Always something. But the sad thing is, as the lives of young people can direct a play.

What will be next? What will be told to do for young people to have a great time?What are the ideal conditions for you to work when you sit down on a blank card? What is a typical day Paul Kuczynski?

- Every day I start physical activity (fitness, running, etc.). That is the basis. The best way to "refresh" thoughts ... Or the best way not to think about drawing. Then sit down to draw, the project prepared the day before. I spend the afternoon in front of a computer (mostly replying to 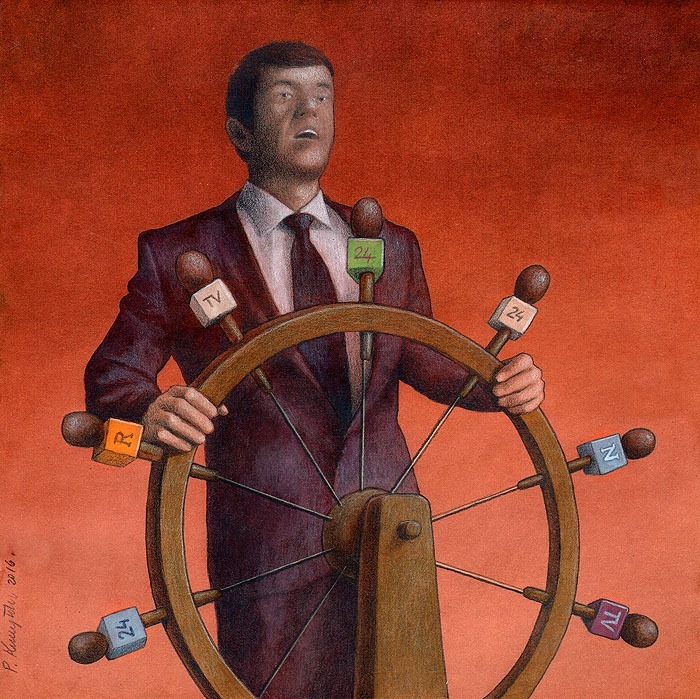 - The brain, like a muscle, if it is well trained, it works well ... but of course there are ups and downs.

Which of your drawings you think is the best? Are there any of which by the end you are not satisfied, or not understood?

- I'm hard on myself and would rather not admire your work. I always think that the next will be better and it pushes me into action.

Of course, like any creator'm vain and I am happy when my work are noticed and rewarded in competitions.

Collaborate on a permanent basis with specific editorial, publishing houses, if you're a freelancer?

- Rather, I work as a freelancer.

This state of affairs suits me better. Although since I have been cooperating with the "Characters". 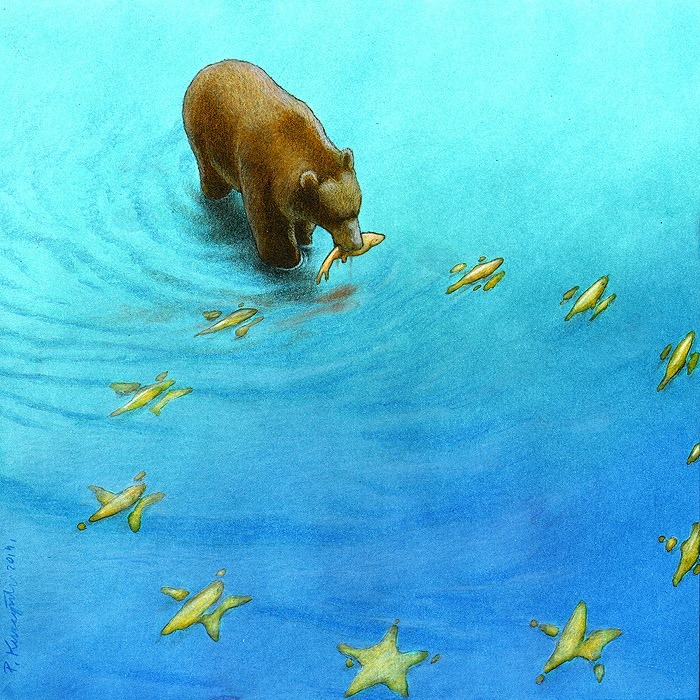 You get a lot of proposals unions? Or maybe there were some unusual jobs?

- Last mostly proposals from companies printing works.In interviews you emphasize that you are attached to his hometown - Police do not like big cities.

What could persuade you to "move it to the world?"

- I can work anywhere, where I have the angle to draw and access to the Internet ... And if it's all I have in Police, plus quiet environment, friends and family is nothing I do not need more.

Let me ask you about the private life - what do you like to do after hours,when no longer draw, you do not have to worry about the fate of the world?

- I am going to run. I train to go below 40 minutes for 10 kilometers. October 15 will be held in ćwierćmaraton Police. I invite you! 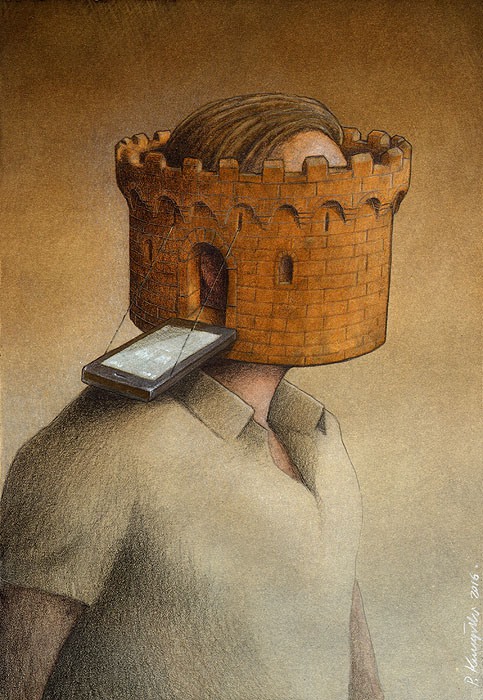 Album? Exhibition? New Website? What are your next career plans?

Paving himself a model career in the industry? Where would you like to be for, say, ten years?

Taking into account more than one hundred awards, are there any you dream about?

- Contests me now less spin and lately I have been so much time there, but it's always nice to remember. Thanks to built my best work. Of his drawing I do not think in terms of a career in the industry. I drew, as long as I have ideas and strength. If it still will be liked, and the occasion allow me to make money, that's wonderful. It is enough for me.