“Are you volcano?”, I asked

“Why aren’t you scared”, I asked

“Because god is with me”, she said

“My eyebrows”, she said

“What is fifteen”, I said

“Are you sweetheart?” I said

It was midnight and I had put my lap top next to my ear and was listening to Abdorahim’s Manish tone. My heart was beating fast. Maybe the love was near…between the flowers named weed,  in the greenness of weed, in its taste and smell, in its future or the people who trampled it many times,  my eyelids were closed unconsciously, thinking that I have forgotten Abdorahim and every time I played the song from the beginning.

“Is there chain” I said

“On my neck” she said

“Is there death” I said

“On my way” she said

“Are you scared” I said

It was natural that I didn’t understand some of the words because of his Oughuri accents and thousands of kilometers distance, but everything was clear from the whine of his speech. More obvious than that could be denied.

No, I’m still paying attention: recording the programs, lecture, opening and interviews all were finished and I could stay and Pro. Saadetin had revived my ticket for one more day and insisted that since my suitcases were heavy be with me in Istanbul and help me. So I had a complete day for shopping. AkramBoorazan, the animator of Yumrucuk channel, came as he had invited before and took me to his house for breakfast. He had set the table beside the window and the beautiful scene of the city. His wife had prepared a beautiful table with elegance and diversity and I was happy that there was Kashar cheese and his kindness. I said hello to the flowers which were next to me, yes they were greener. Dried bell peppers and egg plants which were hanged in the corner of the kitchen were saluting and then I sat and we talked about Turkish and its capabilities and Persian and its subtleties and beauties. Turkish people in Turkey say that when we sit in your ceremonies and you talk, we imagine that you are saying poetries and I said that’s why Persian was the literature and poetry language of most countries in the region for a long time. I showed them the way of peeling of the egg and told them that I had learnt it when I was working in bazar. I always mistake Akram’s wife with their daughter, and this time also I asked: “how are your daughters?” I must remember not to make a mistake again this time, like I must not forget my hat in Boorsa so that would not put Mehmet kahraman in difficulty or I must fasten my seat belt in Saadetin’s  car so that he would not be ashamed to ask me fasten it. Then Akram took me to the bazar. Sine I knew it would take a long time, we decided that I call him when I finish my work. He said that he wouldn’t go far and would wait for me in a store. The bells which were hanging from the coffee crusher machine were ringing continuously. Fat Turkish customers received coffee powder in brown pockets. Cobble stones were wet and red radish were hung, cheese was formatted and grated ( kashar cheese), fresh cimmyt (a kind of famous circle bread); fat pieces of bread were lyingdown on the shelves in front of bakeries with flour on them, eve lottery tickets were on the counters of poor people, brave birds were on cobble stones; lazy cats and dogs whom seemed to have all the sadness of the world with them, colorful umbrellas, etc. were all the things that I was watching carefully. From the big store and through internet I checked the code of the clothes with my wife, but I learned a very important experience, it was that the clothes of famous brands are the same in real world to what you see in sites, with tones of unpleasant green or cheap taste which were advertised by using Photoshop and beautiful lights, and I lost my trust in these brands completely. Any code that she suggested and I found in the store was not like its photo.

During breakfast I told Akram that none of these programs had made me exhausted as much as shopping. In the evening Akram bought me a glass of “Koza” which like “Samanou” was made of a kind of grain called “Dari”, he was not sure whether I was familiar with Dari or not.

I started to sing:

“I said I’m cold, yes I’m cold…the non-Turkish person gave me to Dari, and it gave me to the bird”

We laughed and Akram understood that in our folklore we had this word meaning all the words. After all that shopping, we had to go to speedy electric train station so that we could get to Istanbul in two hours. I said goodbye to Akram, such a kind artist. On the train among the professor’s movies, after one year, I found “summer, fall, spring and again spring” movie and some other movies from “Kim Kei Dook” the director. In the station, Mohiaddin Koroglou, the father of cartoon in Turkey, was waiting in his car to welcome us, after usual and ordinary greetings we understood that a cartoonist named Hassan Saskin had invited us for lunch in a restaurant beside the sea. A silent poet, illusionist, and kinder father for his daughters, I have always become ashamed becuase of these favoritisms by the artists. During lunch first we talked about the competitions and a competition in Iran which recently had aroused many discussions was mentioned. Mohiaddin talked about something that made me wide-eyed, but we decided to keep it as a secret between ourselves.  He talked about his decisions and that he did not like examining anymore. Actually I have become inattentive to the childish works of interior friends as a result of a primary uncompromised shock. I think that anything which is noble and real can be identified from the beginning; it just needs time and patience. Then we talked about the human aspects; the philosophy of life; life and even lung they asked me curiously to read a part of my memories to them in Istanbuli , and then generously called it rich literature and said that it was not just an itinerary. It is how I became interested to write the fourth part with a more personal view. Kamil whose atelier with its beautiful blue lights was shining from the street was our next destination. Kamil welcomed us with tea, and then we looked for a plastic bag in the corner of his store house because I had shopped a lot from a store in the evening. Suddenly I understood that Kamil Yavuz and Mohiaddin Koroglou were escorting me to Tabriz and were helping me in carrying my countless suitcases and loads. I was ashamed because of their kindness.  Actually when all members of Koroglou’s family called his cell phone to say hello to me, and when you enter these famous artists’ houses, you will look at them not as famous cartoonists of the world, but as members of your family. I saw Hicabi and gave him the reward of the international festival of productivity which was 3000 euro, and he presented me his exquisite book in return and gave me a package from Mehmet Ghahreman which was full of chocolate. I remember Ahmad Aykenat in Bursa who with such age came out of his car to help me with my suitcase from his car and was wondered because of the heaviness of my suitcase, intelligently and with a grin on his face said:

He said book in a way that the answer laid in the question.

I said: “yes” but the Europeans unlike us do not carry such a number of books.

Now in airport I have overload and before they fine me I told the customs officer that I was a book carrier. And maybe it was due to this that in such a crowded fly, he placed me in a row which was completely empty so that I could rest after carrying so many things.

In the airport, compatriots were more disordered andthis draw attention. A fat bearded guy with a stripped cream shirt was sitting next to me who criticized when heard two old women’s backbiting in the back row. I pointed to the front row, a place where a man had slept on four seats and continued:

Only one of us can occupy four seats in a carefree way while women with children and families cannot find seats.

The fat guy just smiled with surprise, and I saw that the man who was sleeping in a carefree way, had two jackets, one of them was under his head but the young guy did not have any jackets. I stood up in order not to face him whom I think had become very ashamed, and surprisingly everywhere- in the entrance queue, in terminal bus, in passport queue- the situation was the way that we were next to each other. On the plane also they were two rows ahead and I showed carefree all the time.

On the electric stairs I asked professor to open his umbrella and he modestly with a little humor opened the umbrella indoor.
Lest, my heart’s tears which were for the weeds that were actually undetected flowers, wet him. 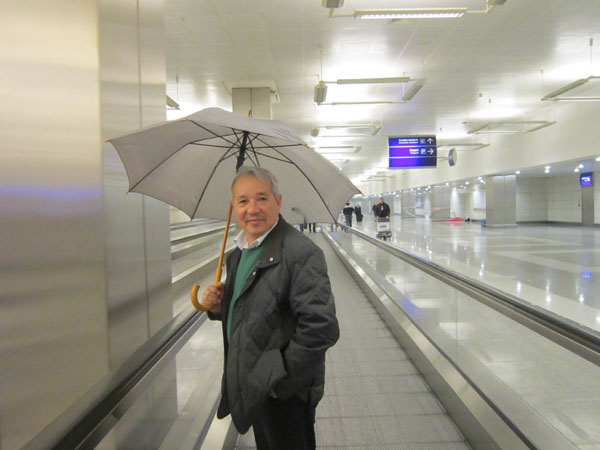