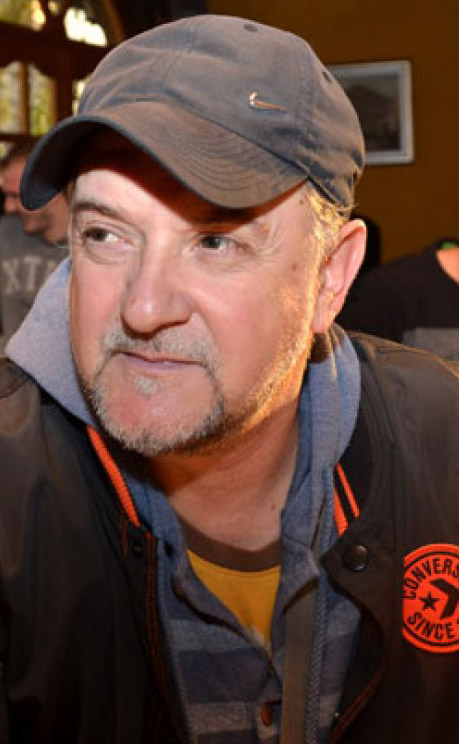 Published: 26. 12. 2014
Darko DRLJEVIĆ, cartoonist: If we only body would be smaller than worms

I think that we strive for the time when man is no longer a man but a robot,

just no more soul. In my cartoons contained attempt to resist the need to

shake off some kind, in my opinion, soulless time that occurred,said Drljević.

does not deal šokačke stories and policies. His caricatures, as pointed out,

I deep dive and not just publish anything.

speaking about his work. Our world famous cartoonists in the festival

got a special award, which was his 128th prize in rich career.

Although received the award for political cartoons, says that does not deal

with "petty politics" and that his "domestic politicians simply are not interested." -

much and do not do their work. Simply we are not interested.

Speaking of Montenegrin society and the position of cartoons and Arts,

it emphasizes that it is not a problem that is not appreciated only a caricature,

but it does not cost anything. - Where are the actors, painters, other artists ...

We made one film in five years.

but has a pair just for politics and the election campaign.

Who are the politicians? How did they receive the right to have everything,

and the other about anything? Someone explain it.

OK, some have and they own part, but Ms.rest of us?

Society without creative people is not a society, it is not culture.

If you do not create it, who are we then - he wondered Drljević.

The caller Portal Analytics speaks of modern times, the advancement of technology,

the place of man, art and cartoons in it, new trends, removal of man from his essence ...

1812darko1 ANALYSIS: Looking at your cartoons might say that they are the expression

of the universal through irony. Is that your opinion has the truth?

DRLJEVIĆ: A lot of philosophy in caricature, even too much.

First of all, whatever I do I want it to work takes longer than I have, so do not do

šokačke stories and policies that last as long as the life of a seahorse.

I make cartoons concerning everything in this world- philosophy,

I deep dive and not just publish anything.

What we publish must have strong message. ANALYTICS:

That is noticed in your cartoons.

that somehow threaten what is a human being.

Are you certain your cartoons can be seen as a critique of modern society?

We captured all sorts of things.

Even Einstein said that the doctrine of the people to make stupid people!

Let's go therefore and big steps. I am not, however, exclusive.

In all there are good and bad if you dowse to pull what is good draw'll be fine,

if not, then you draw bad.

I have a caricature of a man is drawn in a cage from which the house on the laptop.

The laptop is drawn bird that symbolizes social network, Twitter.

So - the man in the cage and the bird, or tweeter is out there.

of all kinds of things. Speaking of the cage - see this on modern buildings -

There is no nature, only the concrete.

What are those designers who do not predict nature within one district?

Children who grow up in such a concrete ambijantu are really in trouble.

Is it there when I develop will overcome the material over the spiritual?

DRLJEVIĆ: My opinion is that what prevailed was "horned",

it is again a philosophy, but in which I deeply believe.

The man is going to see it - eventually.

It already feels in mind the fact that the material overcome spiritual;

spiritual disappears from a man like disappearing ozone layer.

We become just a regular one, and what makes us human beings literally pumped from us.

If we had only body would be smaller than the worm.

What would we be that there is nothing after this brief dream called life?

ANALYSIS: Are you referring to a man as a natural being is suffering?

Because in your caricatures may be seen and just cry of the being.

DRLJEVIĆ: Exactly. I think that we strive for the time when man is

no longer a man but a robot,just no more soul.

In my cartoons contained attempt to resist the need to shake off some kind,

in my opinion, soulless time it occurred.

You see that the money the government all sorts of things,

in the background of all the money, power and force.

The man was simply became a slave. Here I listen to the news,

a man entered the school or the mall and kill several people.

So we must ask ourselves whether this is a man. He has a human

form but it can not be a man - it lurks something else, which is not human.

Happens all the horrible things on this planet.

ANALYST: And where in this technological world, a place of art, or caricature?

DRLJEVIĆ: Cartoon lives more and more over the internet.

That's to say, and that there is something good.

I caricature do now and she can for 10 minutes to tour the whole world.

You will see thousands of people. In this sense, the good this new technology,

we cartoonists are increasingly sending their works over the Internet.

Save money and paper.

These are some good things.

But you still have to touch the paper, to feel the matter -it's all gone.

editorial board in which every living thing.

Togo has less and less today, these are the trends.

However, I see everything through a bit frivolous.

If a man understands all too seriously is ready, he will surely fall into depression.

Therefore, little one should try to make a joke to this reality and make it easier.

So that people need more to deal with humor.

Because I think it's much better than tranquillizers.

ANALYSIS: What is the material component, can make a living off of art and cartoons?

1812darko3 DRLJEVIĆ: It always asking me and I constantly answer -

why do not you ask can you live without cartoons. It is a relative thing.

In good times, ordered societies certainly can not live on art and cartoons.

colleagues from all over the world. For us it is very difficult.

I, however, do not deal only caricature, but I and bounty hunter.

There were formerly in America beaver hunters, bounty, however,

I am now a bounty hunter.

I participate in all international festivals and average annual get 10-15 awards.

DRLJEVIĆ: Of course! First prize except plaques and medals include the amount of money,

now it all depends on how much of the festival will be that amount.

United Nations and signed by the Ban Ki-moon personally.

I got the main one I'd year crunched the money.

ANALYSIS: How many awards in your "hunting career"?

DRLJEVIĆ: The one I got on Thursday was the 128th ANALYSIS:

It is interesting that you get a prize for the UN political cartoons,

and never to deal with local politicians in his cartoons.

DRLJEVIĆ: I said before that I do not petty politics, local politicians

I appreciate the high international politicians and our party

For me it was a politician Winston Churchill, he was a prudent man,

received the Nobel Prize for Literature.

They are politicians, those who have karma and who have something to say.

There are his anecdotes recounted to this day.

budget for culture because the Germans attacked.

He answered - and gentlemen for what we fight then if it discontinued?

1812darko4 ANALYST: But you were making an exhibition

in the Assembly dedicated to politicians.

What are you then say?

DRLJEVIĆ: To be honest I was not interested what they think,

and I did not even try to build them a caricature of what should they be.

All these portraits were made for daily newspapers,

if they were a politician gave an interview that was put to the text.

I had to do them in a way that they do not mock,

That's why I had criticism from the people and the audience,

complained to me that I should not to be "sharper".

ANALYSIS: Is there interest in cartoons?

DRLJEVIĆ: In Montenegro, there is no room for caricaturists.

Newspapers say prefer to publish an ad or a death certificate,but a caricature.

Finally we take off from the Internet.

They steal karikatrue, it only with us has.

This is plagiarism just as is the case with music and movies.

I know the Montenegrin daily newspaper that downloading

from the Internet cartoons, all these authors know personally.

I tell him this list to a friend stole a caricature, they would have to pay him 5000 euros.

As for the transfer, space cartoonists us it goes like this.

Ulete some money and set up a new list,

then call the cartoonist because they have to have it.

E, when the steam exhausted first cartoonist goes out.

They say, "I apologize, but there is no more money."

ANALYST: Well it seems to me that cartoonists today do not cost much.

DRLJEVIĆ: It is not a problem that is not appreciated only a caricature,

not cost anything! Where are the actors, painters, other artists ...

We made one film in five years.

but only one has money in politics, the election campaign.

Who are the politicians?

How did they receive the right to have all the other about anything?

Someone explain to me it?

OK, some have and they own part but Mrs. rest of us?

Society without creative people is not a society, it is not culture.

If you do not create who we are, then?

ANALYSIS: What is the position of the Association of cartoonists?

DRLJEVIĆ: Our Association cartoonists deals with publishing and

creativity and we have entered into society NGOs, there are some

companies to protect the butterflies, cockroaches and whatnot.

There is a budget that is allocated to culture, so we have to apply for

vacancies which are launched for NGOs to get a pair.