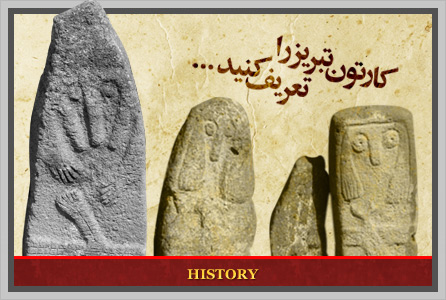 The first examples of cartoons in Azerbaijan should be searched inStone Pictures, Statues and Columns. There are all cartoon features in the works that they seem more than 4000 years old. The exaggerated sculpture "shahr Yyry" in Meshkin city are the samples knowingly exaggerated cartoons which was created four thousand years ago and are the oldest examples cartoon in the world. The earthen wares and bowls with specific theme and cartoon exaggerated can be found in the Museum of Azerbaijan.but the age of formal cartoon history is the age of publication and entrance of printers in Azerbaijan.Because of becoming the gate of West to East ; like all arenas such as the school ,newspaper,Preschool ,cinema ,theater ...and the Cartoon, Tabriz is considered the first in Iran.The leaflets were printed often with gelatin print and used the cartoons in the political and social aims.The leaflets were distributed at night so their publishing place and their publishersare not clearly. But maybe we can say Mollanasreddin was one of the first publications that the Cartoon was seriously publishedin it. At first Mollanazsreddin was published in Teflis,after in Baku and then it came to Iran and was published in Tabriz. Jalil Mohammad Golizadeh "an intellectual and freeman who was publishing this publication" with the helps of cartoonists such as Behzad, Azimzadeh, Rooter, Shemerling, Moosa zadeh and Mohammad zadeh were generalizing cartoon.Next, some publications such as  "Azerbaijan"," Hasharatol arz " and several other publications benefited from  cartoons in Tabriz.They were drawing cartoons against Qajar tyrant governors, health status, superstition, colonialism ,discriminatory family relation ships. So they were of ten attacked. After the suppression ofConstitution, cartoon was weakened in Tabriz and except some publications which they used cartoon as illustration, there wasn't any important happening in the area of cartoon until to revolution. After the revolution, the revolutionary students of different political parties and groups, used cartoons as a tool to humiliate and ridicule and suppression of opponents. Therefore cartoon was damaged and publications were stopped.In the late sixties; once again, Tabriz's Cartoon began to work in some groups such as Tarkhoon, Cactus, Gunash, Sizdah, Kirpi, etc. And it reorganized itself that the product of this effort was Tabriz Cartoonist Association in 2002.Simultaneous with establishment the first and only cartoon registered and formal organization in Iran; publication, website and the competitions were started widespread activity.FECO Iran was established and people welcomedcartoons.It isn't exaggerate if we say Tabriz cartoon has started its golden years and all important activities of young cartoonists promise a fruitful future for the art in Tabriz.